This dynamic adventure organized and personally guided by Pavel Ageychenko, the founder of BaikalNature, aims to escape the stress of the city and immerse you in unspoiled nature as far as the eye can see. Restart to be reborn. Refresh to come back ready to conquer. Over three days we will paddle, explore, breathe, camp and have long conversations around the fire ... everything except Belarus, Putin or even the Covid-19!

Lake Ladoga is the largest in Europe. With many islands, its area is approximately 18,000 km2. Ladoga's skerries are rightly considered the most scenic spots on the lake. The "skerries" is a word of Scandinavian origin and literally means "rock in the sea". Indeed, most of the islands that make up the archipelago are small and mostly covered with rocks.

In order for such formations to appear, special geological conditions are required. For example, in the lakes of the central zone of Russia, skerries are almost impossible to find. It is mainly the prerogative of the north-western regions of the country, where in ancient times the territory was plowed by a giant glacier. When the ice melted, many fragments of rocks and narrow depressions remained on the ground, which were immediately filled with water. This is how the skerries were formed.

Ladoga Skerries is a unique natural complex made up of over 650 islands of varying sizes. Each of these islands is called a skerry. Scattered across the northern and northwestern parts of the lake, they form countless straits and fjords. They represent a great danger to the captains of any ship, as some of them are barely visible above the water.

However, for tourists they are a real paradise, ideal for kayaking trips!It is in this absolutely breathtaking setting, in unspoiled nature and away from the crowds, that we will get lost for three days!

All equipment is included at the price of the trip (kayaks, tents, sleeping bags, groundsheets, camp equipment. This trip does not require significant physical effort, you just need to be in good health and have good mindset to give up the amenities for two nights at the bivouac The itinerary can be adapted to the wishes of the group on site. 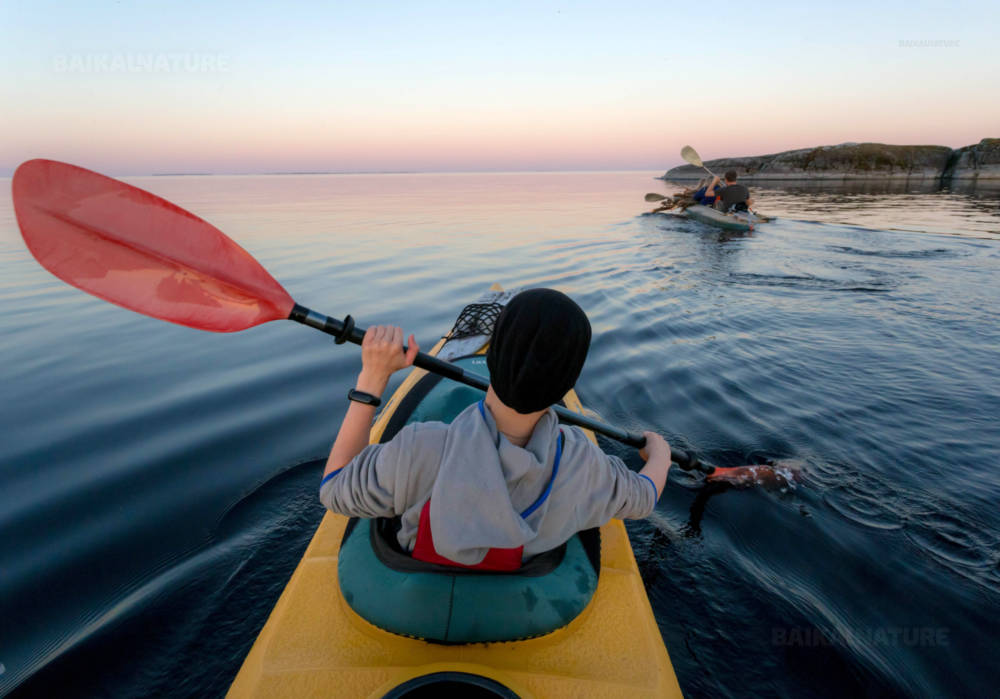 Travel smart with our discount system!
Detailed description
Price includes
Price does not include
For more info, please download the detailed description of the trip.
Reviews
No reviews anymore or no reviews at all for this tour. Below reviews for destination:
Karelia
4.33
4.33
Total score
4.00
Work of BaikalNature office before and during travel / customer support
4.00
Quality of accommodation
4.00
Quality of transport / transfers
4.00
Quality of meals
5.00
Friendliness and professionalism of guides / management
5.00
Quality and originality of visits / attractions / events
Christian

From 9 January 2020 to 11 January 2020
Destination: Karelia
Tour: Karelia Multi-Active
Would you like to travel with BaikalNature again? Yes!
Polina was absolutely incredible. She went out of her way to translate everything for me and ensure I was having a good time. Many thanks!
4.20
4.20
Total score
4.00
Work of BaikalNature office before and during travel / customer support
5.00
Quality of accommodation
4.00
Quality of transport / transfers
4.00
Quality of meals
4.00
Friendliness and professionalism of guides / management
—
Quality and originality of visits / attractions / events
Michel

From 28 December 2018 to 1 January 2019
Destination: Karelia
Custom tour: Nouvel An en Carélie + Cours de la langue russe
Would you like to travel with BaikalNature again? Yes!
Pas mal
How does our reviews system work?

Is open Monday through Friday 9 am to 6 pm.

Question about this trip
Sign up for our emails!
Why subscribe? First, our newsletters are captivating! We are one of the few tour operators specializing in Russian nature, who invests a lot of resources into photo and video-shooting. That’s why even sitting in the office, you’ll feel like you are making your way among arctic ices, walking along taiga valleys, admiring volcanos or looking in the mirror of crystal Baikal waters. Second, there is lots of useful stuff in our letters. The information about outstanding places, new routes’ descriptions, stories from expeditions and trips. And don’t worry, we write in an easy and entertaining manner. And finally, we’re not pushy. You will get all this beauty not often than once a month or two. So you’re gonna miss us!